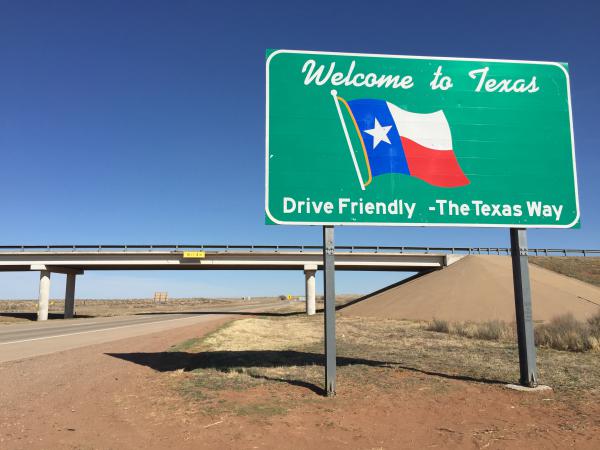 When Bri Ollre came to Cork for her MA she thought she’d be writing about Irish mythology. But what has emerged in her writing is her home place, the state of Texas.

When novelist Colum McCann (http://colummccann.com/ )  came to talk to MA in Creative Writing students recently, he went around the room and asked us to introduce ourselves. I found myself sitting a little straighter in my chair and puffing my chest. I knew McCann had lived in Texas working with juvenile delinquents so I was just waiting until it was my turn and I could tell him that I was from Texas! I was just so proud of that little fact that connected us.

McCann mentioned living in Brenham, Texas—the home of Blue Bell ice cream—and I couldn’t help cutting him off to say that Blue Bell is the best ice cream in the world.

It was that Texan pride bursting out of me.

In my application for the MA in Creative Writing at UCC,  I indicated that I would be writing a “collection of short stories centered on Irish mythology” during my time in the programme. I’d written about the Greek and Roman gods before, so I thought while I was in Ireland I would  focus on the myths of my Irish ancestors. And yet all I seem to want to write about since I got here in September is where I come from: Texas.

In the past, when I traveled, I used to hide the fact that I was from Texas. I was horribly embarrassed by what others thought of Texans (loud, gun-touting racists who think the world revolves around them) and while I do know my fair share of people like that in Texas, we’re more than that. We’re more than the second largest state in the United States. We’re more than “Remember the Alamo.” We’re more than cowboys and Friday night lights. There’s a beauty to Texas that one can only see when they stop taking the shit out of how proud the people are.

I’ve lived in three different areas of Texas in 24 years and each one was unique in landscape, climate and persona. In Kemah (South East Texas), it was all beach and marsh land with hurricane season and NASA. In Lubbock (West Texas), it was canyons and dust and football celebrations that closed the town. In Dallas (North Texas), it was all city skylines and tollways and thunderstorms that shook my window panes.

In my short story classes at UCC, I’ve written several pieces about rural Texas and the people who keep the ranching legacy of Texas alive.  I am enthralled by bluebonnets, Texas’ state flower. I have a whole poem dedicated to that flower (which is due to be published in the June edition of online journal, Dodging the Rain (https://dodgingtherain.wordpress.com/).  Although these flowers cannot be picked,  I love seeing them when I drive along those busy Texas highways: –

and {it] ends with that bluebonnet highway/scarring my porcelain skin with wildflowers/that bloomed when I wasn’t looking.

When it comes to writing about Texas, it’s not something I have to force myself to do. It pours out of me. There’s just something about Texas that’s alluring in a way I didn’t recognize until I left. Part of it is the mystery of my own family. My mom came to Texas when she was 18, after emigrating from Ireland when she was four. I know her story. The Doyle clan (all six brothers and their families) left Dublin in search of better lives and fortunes for themselves and emigrated out of Cobh to Canada in 1967.  While the rest of the Doyles stayed in Canada, my grandparents took my mom and her siblings to upstate New York before eventually making their way down to Texas when my mom was 18.

My dad’s side of the family is a bit more mysterious. His parents died when he was little. I can’t even tell you where the Ollre last name comes from. Ancestry.com says my DNA is 64% Irish/Scottish (narrowed down to Wicklow where my maternal great-grandmother was born), and 34% England, Wales & Northwestern Europe. The little bit of French comes from my maternal grandmother’s side of the family. So, maybe the Ollres were Scottish or English or Welsh? I don’t know. I’ll leave that up to Ancestry.com to figure out.

What I do know about my Dad’s family is that all the Ollres live in Texas and have lived in Texas for as long as we can remember. I’m just about the only one who has left.

To be fair, I have started writing more about mythology in the Spring semester—especially in Poetry II  – led by Leanne O’Sullivan – since the course is entitled “Mythology/Traditional Narratives and Contemporary Poetry”—but it’s been Greek mythology I’ve been writing about. Which makes sense since it was these myths and legends I first fell in love, unlike Irish mythology which I had convinced myself that I should want to write just because of where my mom was born.

I like Irish mythology. I’m very interested in it and its origins and how it differs from the rest of the world’s legends because of how little we know about it, but I feel like I’m forcing myself to write about it; and if there’s one thing I’ve learned in this MA it’s that I can’t force myself to write anything. I’ve got to let it come. Or at least, that’s when the good stuff that actually sounds like me is written.

I used to think I was unique and quirky for hating Texas. Most of that hatred was for the people in Texas who had treated me like a plaything over the years, but that hatred has been misplaced. Texas is a good place. Hell, Texas might even be home for me. I don’t know, but it’s home to the people I love most. Which may sound like cliché-writing, and makes me feel silly, but it’s true.

Now, it’s not to say Texas is the best place in the world. I’ve seen plenty of places that are more beautiful, better run and better taken care of, but I have a soft spot for that Lone Star state and I figure I can allow myself to write about her in the way she deserves—even if it means dropping my initial intentions for my time here in Ireland.