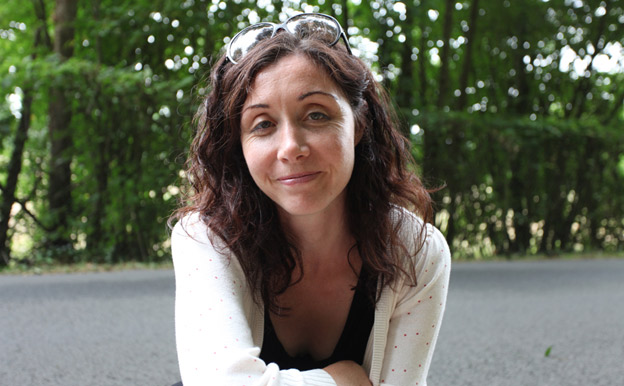 Rachel Andrews is a journalist, cultural critic and essayist.  Winner of the 2018 Hubert Butler Prize, Rachel  has written for n + 1, Longreads , the London Review of Books, the Dublin Review and The Stinging Fly.  She teaches on the media module of the MA in Creative Writing.

from an essay “The Turning”

My daughter tells me something I didn’t know. The most ancient starfish in the world is 400-million-years-old and comes from dinosaur times. Then she tells me something else that is new to me. Glitter pens are dangerous for fish and for the sea. That’s because the glitter breaks off and gets into the ocean, the fish eat it and they die.

She says this in a light tone, her manner matter-of-fact as I resolve anxiously to jettison glitter products from our lives, another in a series of attempts to mitigate a calamitous future I can intellectualize but cannot yet fathom. My daughter, eight-years-old, lives primarily in the present, although lately she has begun to imagine her way into a time to come, which currently involves marriage and children of her own. She is extremely interested in some of the workings of the female body: how an egg slowly grows into a baby inside of mother’s tummy, how mother must work long and hard to push that baby out. She is fascinated to know she was blue when she was born; she asks me time and again to re-enact the sharp, frightening cry she emitted at the moment of her arrival into the world.

My daughter is starting to find her way into the trouble of existence, starting to conceive of life as something wrought in bright and shade – and sometimes only in shade. For the most part, she continues to turn to me for explanations and for comfort, even though as I struggle to process the reality of our degrading planet, I am increasingly looking around for my own explanations, my own comfort. When I am fretful I might look to art, to literature, for a way to fully conceptualize the situation we find ourselves in.

Cathy Fitzgerald, who grew up in New Zealand and lives in rural Ireland, developed an eco-literacy workshop to help artists look at changes they can bring to their practice in response to the environmental-social emergency. Fitzgerald conducts her own eco-social art practice: it involves the transformation of her small local forest from monoculture plantation to mixed species woodland. It’s a way, she says, of “softly subverting” the stranglehold of industrial forestry, as well as the legacy of colonial land clearances. Fitzgerald holds her forest close: she looks for ways she can support its diversification by slow and selective thinning of the conifers, which opens up the space for native Ash seedlings to grow; she values its capacity to keep going in the face of the deadly fungal Ash-dieback disease that has swept from Europe across the Irish Sea. Her art practice also takes the form of blog posts, of photographs and videos. In the short film she named the black space: (resilience) of the ash night, she walks through the forest at night, rain tumbling, the black of the video images a reflection of the blackness beginning to engulf the earth. Yet all the while her camera captures the straight slim shoots of the young Ash trees coming up from the ground. All that “quiet, relentless growing,” writes Fitzgerald in a blog post. All that pushing upwards, despite it all.

Thatcher said there was no alternative. Fukuyama announced the end of history. I grew up at the feet of those who worshipped individualism, you versus me, humanity ascendant over the planet. I got the hard sell, as Naomi Klein has termed it. But my daughter thinks about the world around her in a way I did not. That she has been on the schools’ climate strikes, that she has carried a home-made sign that depicts the planet on fire, that she asks me if the earth is healthy and I have to reply that it is not, means her consciousness, if nothing else, is elevated – and mine can only rush to catch up.  The philosopher Glenn Albrecht has invented the term solastalgia, to give expression to the very real distress caused by negative environmental change. As the modern-day plague and the burning sun come gunning for us, I feel the experience of solastalgia up close and present, a dread rising. At the end of The Great Derangement, which Amitav Ghosh wrote to try and understand why literary writers, along with artists, have not addressed the issue of climate change, he offers no false hope, but, unlike me, he eschews despair. He sees the future in my daughter’s generation, wants to believe that as she and those who follow her come into awareness, they will see the natural world for the living presence it is, will reach out to other beings, respect them, find kinship, make connections. It is this vision – which is not a new vision, but is surely new for our scientific, rationalist, technological age – that, he says, will find its expression in “a transformed and renewed art and literature.”

At her workshop, Cathy Fitzgerald suggested something similar. If we are to face the uncertainty, then we can only do so by turning one towards the other, by linking arms across consciousnesses both human and not. We must walk together with the land, inside the darkness and the resilience.

TOMORROW: “Arctic “by Cathy Ryan and “Head-Land” by Elaine Desmond