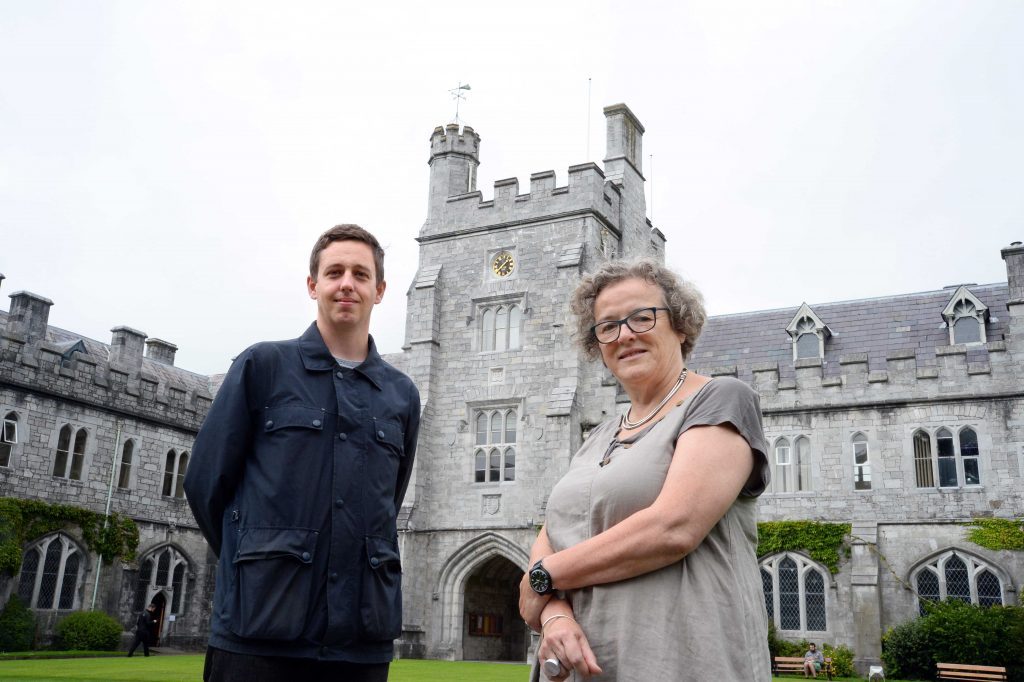 Mark Kelleher graduated from the MA in Creative Writing in 2016 and is currently pursuing a PhD in contemporary American literature at Dublin City University. Mary Morrissy is a novelist and short story writer.  She is the Associate Director of Creative Writing.

Tonight, I am thinking again about breathing.

When I was a child, I did not like the eeriness of bedtime fairytales. Instead, my mother used to read to me from my father’s old science almanacs and add her own twists to their incogitable truths. I never forgot them and some have contributed of late to what seems now to be the fundamental mood of my existence.

For instance, once, when I was off school unwell, she read to me that in a day’s worth of breathing, one is likely to inhale at least one molecule from the breaths of every human who has ever lived. This thought soon became a peculiar source of comfort and many times when I felt the urge to misbehave I put it down to the fact that for a fleeting moment I had Hitler inside me.

I have been doing something different lately – I have been thinking about breathing in the entire world.

This is what was on my mind while looking through the bedroom window just now. It is something I have been doing every night for the last month – looking out there and thinking about breathing, while behind me the man on the radio whispers replies to callers who seem so faraway I sometimes imagine them to be in worlds entirely separate from this one.

The skyline looked totally on fire a few moments ago. The sight of it lifted me out of this room and into the arms of my mother again. I was seven. It was night in summer and we were in a caravan in Swansea. My father was outside with his cigarette and my mother was at my bedside, inventing some truths of her own to help me fall asleep. With her hand lightly squeezing mine, she leaned towards me and said quietly that red evening skies were made by the lonely of the world. Everyone who had no one, she continued, had their own unique light and it shone brightest when they felt at their most alone. Their collective shine was to remind them that they were alone together.

I didn’t know then that my father was dying.

The scenes from my window here are not, I suppose, spectacular. In fact, they rarely change. There are the backs of houses and the backs of more houses beyond. There is a motorway some miles to the west, but it is not visible from here; it registers its presence only through a sound that is scarce now. To the east, two cranes located on a site that has stalled. That dog four doors down seems to only come alive at night. There is no menace in his barking and I do not find it a nuisance. I tell myself that he is singing in the only way he can.

I haven’t seen anyone for days, but it doesn’t stop me from imagining how I would appear to someone if they looked up and saw me here. They may wave and perhaps mouth a greeting of some kind. Of course, it’s just as likely that they might see me and turn quickly away.

What they wouldn’t see is a woman trying in her own way to find her way home.

I’m seventy-six now and for a long time now I have contemplated making a wound in myself just to see if I glow.

But for now, at least, I am at this window and I am thinking about breathing.

Margaret’s latest shop, ordered online – oh yes, she is computer-literate, thank you very much – and delivered to the front door by an anonymous gloved hand, is lined up on the counter-top like a miniature city. A thuggish, spouty container of detergent, a thin tower of disinfectant spray, a monolithic nine-pack of loo rolls lord it over the low-rise goods, cans of mixed beans, chickpeas, salmon.  She’s not sure why she’s ordered these.  Since Fintan died she hasn’t bothered with cooking much, resorting to hyphenated food.  Film-wrapped.  Oven-ready.  But with someone else doing her shopping, she was afraid she’d be judged nutritionally if she only ordered microwaveable stuff.

She used to be proud of her store cupboard.  There was always something in there she could mix in, or add, to zip up a shop-bought soup or bulk out a stew.

“You’re thrifty,” Fintan used to say. “Like a war bride.”

She liked being 12 years younger than Fintan. She’d been the baby of the family and she’d never lost the notion that everyone in the room was older than she was.  If it hadn’t sounded so foolish, she’d still be declaring her age in fractions – I’m 74½, thank you very much.

Now her age is an underlying condition. She’s vulnerable. It’s official.  She walks and swims and sings in a choir and was, up to a week ago, a perfectly functioning member of society, but now she’s somehow lesser.  That’s why she’s given up watching the news with its fruit machine of fatalities.  She feels targeted.

When she begins clearing the press to make way for the shop, she realizes she’s been presiding over a food archive. Supplies for emergencies long gone. Late night snacks for when the boys would come in from the pub, ravenous, or Trudie would bring college friends back for a home-cooked meal. With all of them gone, she no longer has to draw on these reserves. Now she finds tuna sulking in brine that expired five years ago last August, soya sauce with a 2012 date, a tin of green lentils from 2007!  Just-in-case provisions – condensed milk from 2001.  Cut-price exotica – sauerkraut that came of age in June 2010. The only up-to-date items are the packets of chocolate biscuits and bars in the “goodie” box for the grandchildren and who knows when she’ll see them again. As for herself, she’s lost her taste for sweetness.

What should she do with the out-of-date tins? Throw them out?  And in which bin, for pity’s sake? And wouldn’t that be wasteful? Could a food bank use them?  Or should she hang on to them in case things get worse? Will there come a time when she’ll be happy to spoon decade-old processed peas direct from the can?  What’s the worst that could happen? Aluminium poisoning? How does that compare to being an untouchable, lungs filling up, tended to by nurses in goggles and space suits, dying alone and being buried without ceremony?