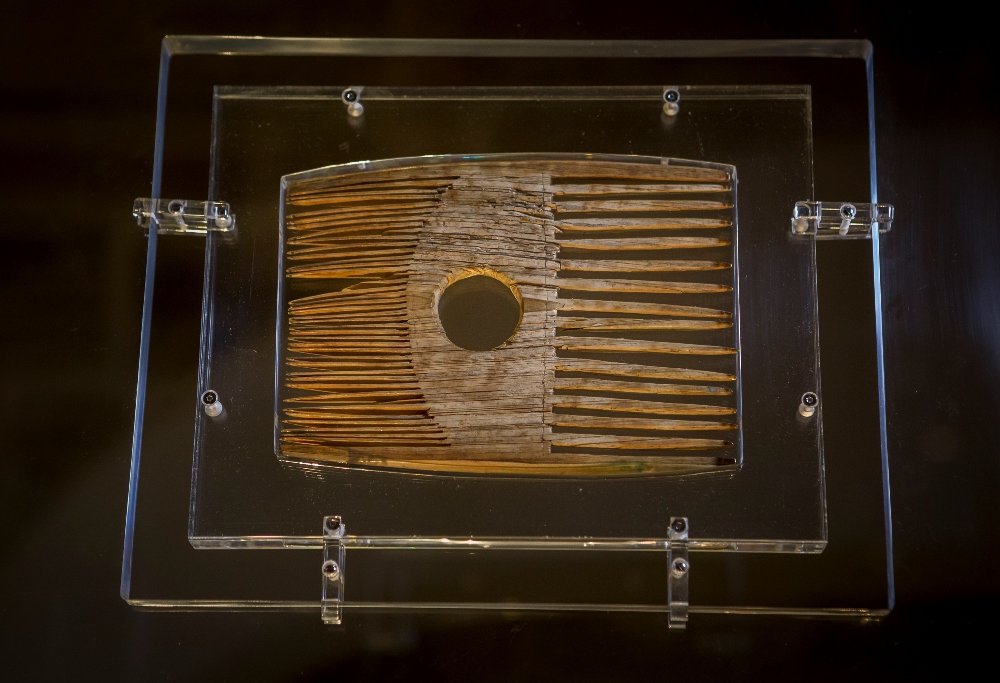 Objects in fiction are powerful tools, lending depth and layers of meaning to the narrative, speaking to the reader through their own voice. PhD student Fiona Whyte, writing a novel on the life of St Cuthbert,  discovered the power of props when she visited the newly opened Treasures of St Cuthbert at Durham Cathedral.

“The Tutankhamun’s tomb of the North East” – that’s how historian Dr  Janina Ramirez (http://www.janinaramirez.co.uk/ ) describes the recently opened Treasures of St Cuthbert at Durham Cathedral. Beautifully and sensitively arranged in the cathedral’s medieval Great Kitchen, the treasures include St Cuthbert’s coffin and portable altar, as well as his pectoral cross and, poignantly, his comb. These objects are witnesses, Dr Ramirez says, the connection point between our world and the early Christian Anglo-Saxon world. They speak to us; we just have to learn how to listen.

I travelled to Durham to see these artefacts and, yes, to listen to them as well. I wanted their stories to feed into mine, to become characters in my novel about Cuthbert. I’d been to Durham before, as well as to Lindisfarne and other places associated with Cuthbert, but now I would see some of the objects most intimately associated with him, things he touched, wore and carried with him in his daily life.

I arrived at the cathedral with the air of a medieval pilgrim. It didn’t feel right somehow to proceed directly to the Treasures, to approach the relics of the saint without conducting the appropriate rituals. So instead I first of all walked through the cathedral, exploring the aisles, the side chapels, the quire, marking out key stages, before finally making my way down to the 14th-century Great Kitchen where the treasures are housed.

Tutankhamun’s tomb indeed! The exhibition contains priceless artefacts and relics. The centre-piece of the exhibition, St Cuthbert’s coffin, is made from English oak and is regarded as the most important wooden object surviving in England from before the Norman conquest. This is not the coffin he was originally buried in. Eleven years after his death the monks of Lindisfarne exhumed Cuthbert’s body, intending to wash his bones and place them in a reliquary for veneration. Instead, they found his body wholly incorrupt and had to set about making a new coffin.

The coffin is decorated on all sides with beautifully carved figures of archangels, apostles, Mary and the Christ Child and Christ in Majesty. It seems as if the monks were surrounding Cuthbert with these powerful religious symbols both as a proclamation of his sanctity but also to invoke continuing divine protection for his miraculously preserved body. Interestingly, the coffin also has runic as well as Latin inscriptions, a nod to the language spoken by Cuthbert and the people he ministered to.

For me, the personal relics are the most captivating feature of the exhibition. Cuthbert’s portable altar was originally a plain wooden oblong inscribed with crosses which was later covered with silver plate and a central silver roundel. This is almost certainly the altar which Cuthbert would have carried with him as he journeyed, preaching and ministering to the people.

Cuthbert’s gold and garnet cross is a hybrid design. Its cloisonné style echoes the pagan Anglo-Saxon past, but the cross also reflects the design of monastic manuscript illumination. Damaged in his lifetime, the lower arm is worn and some of the stones have been replaced with glass. However, it gleams as brightly today as it must have done when it hung about his neck.

And then there’s the most intimate object: his comb. Made from ivory, it’s large and  slightly grubby-looking. Cuthbert would have used it to ceremoniously comb his hair and beard before saying Mass. It’s a touchingly prosaic object, and it’s unlikely that the monks would have placed it in his coffin if it didn’t actually belong to him. 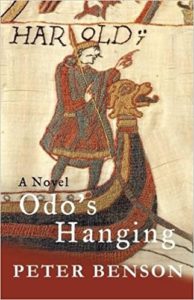 So what to do with these treasures? If historical artefacts can tell tales about the past, in fiction they can do so with added value. Objects in fiction are powerful tools, lending depth and layers of meaning to the narrative, speaking to the reader through their own voice. A simple teacup, a stone, a pen can become invested with meaning and take on a symbolic role in the story. Think of the ring in The Lord of the Rings. In historical fiction, artefacts can provide inspiration for the narrative or even serve as the framework for the story. Odo’s Hanging by Peter Benson, –https://almabooks.com › Authors, –  for example, is an imaginative retelling of the creation of the Bayeux Tapestry.

The Treasures exhibition tells us revealing stories of Cuthbert’s life, the Anglo-Saxons and the early Christian church. But for me the exhibition is haunted by questions and gaps in the narrative. Who carved the exquisite but slightly primitive drawings on the coffin? How did the pectoral cross come to be damaged and what happened the missing jewels? Where did Cuthbert get the altar and where did he journey to with it? Who gave him the comb? Questions and lacunae such as these provide another treasure trove, another Tutankhamun’s tomb, one for a fiction writer to bury herself in.

Dr Janina Ramirez’s lecture, The Treasures of St Cuthbert, is available at https://vimeo.com/230117192