PhD student Robert Feeney travelled from Tokyo to Matsue in search of the subject of his creative writing thesis.  Greek-born but Irish-raised author Lafcadio Hearn (1850 – 1904), is largely overlooked in the West, but he is beloved in Japan as a cultural icon, particularly in Matsue, where his great-grandson still lives. 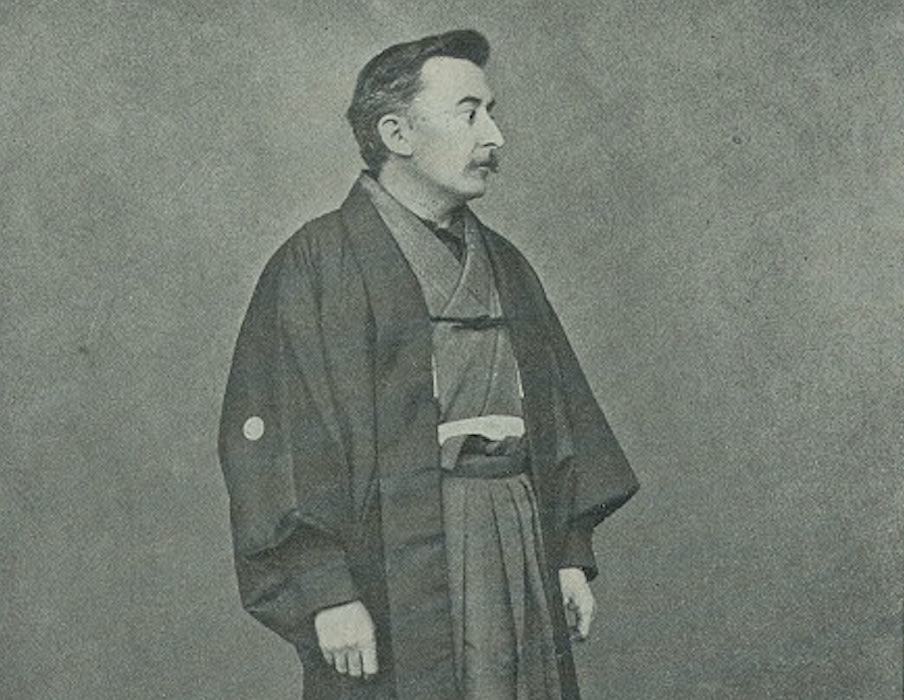 Lafcadio Hearn. Photograph: Courtesy of the Miriam and Ira D Wallach collection at the The New York Public Library

The Willer Express has a generous seat pitch of ninety-one centimetres, adjustable small pillow for the back, and a head canopy for sleeping. Having had some previous experience of night bus travel in Japan, I am prepared for the rigours of the journey. Provisions have been purchased from the convini in advance, a snack combination featuring both sweet (vitamin C infused-lemon candy to strengthen my immune system against the recycled goblin breath of fellow travelers) and savoury (‘Cheeza’ crackers, foil packed for freshness).

I have re-acquainted myself with the rules of conduct, with specific regard to the sensory non-disturbance of other customers. The volume of my i-Pod has been turned down. I have thoroughly showered and deodorized. My clothing is dark and unexciting.

On the bus I am seated next to an old gentleman who obviously has not washed as thoroughly. This is a great start, as it positions me near the top of the moral high ground I so desperately want to claim. Disaster strikes, however, when, only one hour into the journey, I feel some hunger pangs and open my foil packet of biscuits. Instantly the bus is filled with the potent odours of artificial camembert and brie. It is akin to opening a Pandora’s Box of cheese, only at the bottom of the box there is no hope, only more cheese stench. My neighbour audibly sniffs the air, then with a dramatic snap pulls the seat canopy down over his head like a protective helmet. The air between us congeals and goes cold. The moral high ground crumbles beneath me like a mature cheddar. Oh well, I think, only eleven more hours of this to go before home.

At least I had the foresight to pack my snacks above my omiyagi, thus reducing my noise pollution during the trip. Omiyagi is Japanese for souvenir, an industry unto itself in these parts. In Western society, when a worker returns from holiday, they glumly resume their seat at the office and utter some choice sentences on how fantastic the holiday was, or how they wish they were still there instead of here. The Japanese worker, on the other hand, returns to the office and apologises to their colleagues for the extra workload they have had to endure because of their absence and, in recompense, gives everyone a small gift, a souvenir from their vacation destination.

While my trip was not necessarily a vacation, and my colleagues are not Japanese, in order to retain some standing on the moral high ground I purchased several boxes of Hoichi no Mimi Manju from the extensive Matsue souvenir shops. These are small pinkish confectionaries, made to resemble ears, but being a sort of sweet dumpling with a centre of fig jam. They were inspired by a folk-tale translation penned by my thesis subject, Lafcadio Hearn. In this story, a blind musician named Hoichi is plagued by ghostly fans. A helpful monk seeks to aid him by inscribing his entire body with Buddhist sutras, as a sort of protective shield. But he forgets the ears, and when the ghosts return that night, poor Hoichi loses another sense when they rip his ears from his head.

Professor Koizumi Bon, great-grandson of Lafcadio Hearn, whom I am travelling to Matsue to meet, told me that his students invented this sweet, or at least the idea for it. However, I imagine that when I try to explain all this to my colleagues (uncouth English teachers all), they will be underwhelmed by the cultural significance of the souvenir and my apology, and I will be too tired to press the point.

On my three-night journey to Matsue – on the north west coast of Japan’s main island –  I have attempted to sleep in an internet café, a laundry room and a bus. A night spent in an internet café is not as salacious as it first sounds. Many establishments in Japan cater for this exact purpose, offering large booths with lockable doors, shower rooms and price plans that cater for long stays. I paid roughly ten euro for the privilege, including an inexhaustible supply of coffee, toast and soft serve ice cream. But after standing on a crowded bullet train for four hours, the only thing I wanted was to be horizontal for whatever time remained before the seven am rapid service to Matsue station.

The space in my booth was not quite sufficient for a frame of six foot two, but I fell asleep as soon as my head hit my makeshift rucksack pillow. Unfortunately, I slept through the café manager’s knocking as he attempted to inform me that the shower room was free. When I awoke stiff-necked, there was no time to re-enter the queueing system for a wash. I resigned myself to the fact that for my first meeting with Professor Koizumi, I would be covered in the dust and sweat of work and travel. It was the middle of July, and the Japanese summer was ramping up to mid-thirties heat and one 100% humidity.

The world has largely forgotten Lafcadio Hearn, but Matsue, his first domicile in Japan, has not. Beyond the souvenir shops, his face (aquiline, owlish, in profile to hide a damaged eye) is prominent on several placards dotted about the city. I visited the bean-washing bridge, the subject of another gory Hearn tale concerning a samurai who unwisely taunts a demonic presence there and returns home to find the decapitated corpse of his infant son.

Motorised gondolas of tourists pass under the bridge at regular five-minute intervals. I stayed a while, to see if I could catch snippets of the tour guides’ speech as they passed, to confirm I was at the right bridge. But all I got, over and over, was their command to duck heads. I visited the old pharmacy shop where Hearn would buy beer, one of the Western luxuries (along with beefsteak and plum pudding) he still had a taste for. The shop was still intact and old-fashioned, but the interior was dark and I was not brave enough to push at the door.

The streets were strangely empty, ghostly. I visited Hearn’s old residence. While Professor Koizumi and I contemplated one of the gardens, we were disturbed by a ruckus in the trees above.

“What kind of birds are those?” I asked hopefully.

After meeting the Professor, I went to the youth hostel to drop off my baggage. After some mangled discussion in Japanese, I realised my booking was for next week and, as this weekend was a long public holiday, there was no room at the inn. Or any inn in Matsue, it seemed. I wandered from place to place as a summer shower fell, even trying some of the hotels beyond my budget, until a man ran after me in the rain and told me he would rent me his laundry room, if I would have it.

The room was four tatami mats, with a small fan in the corner for ventilation and a view of a parking lot. It was ideal. I dozed for a few minutes and day-dreamed of a suited, bespectacled Hearn, walking the streets of Matsue for the first time, notebook in hand, beer buying, bridging, availing of the kindness of strangers and taking in the general comings and goings of the city. Only to flinch, remembering that he himself must leave tomorrow on the Willer Express night bus.

But there was another whole day to prepare for that.