Creative writing PhD student Fiona Whyte was lucky enough to be on a research trip to Lindisfarne, where her novel is set, when an archaeological discovery was made that has created a scholarly buzz. 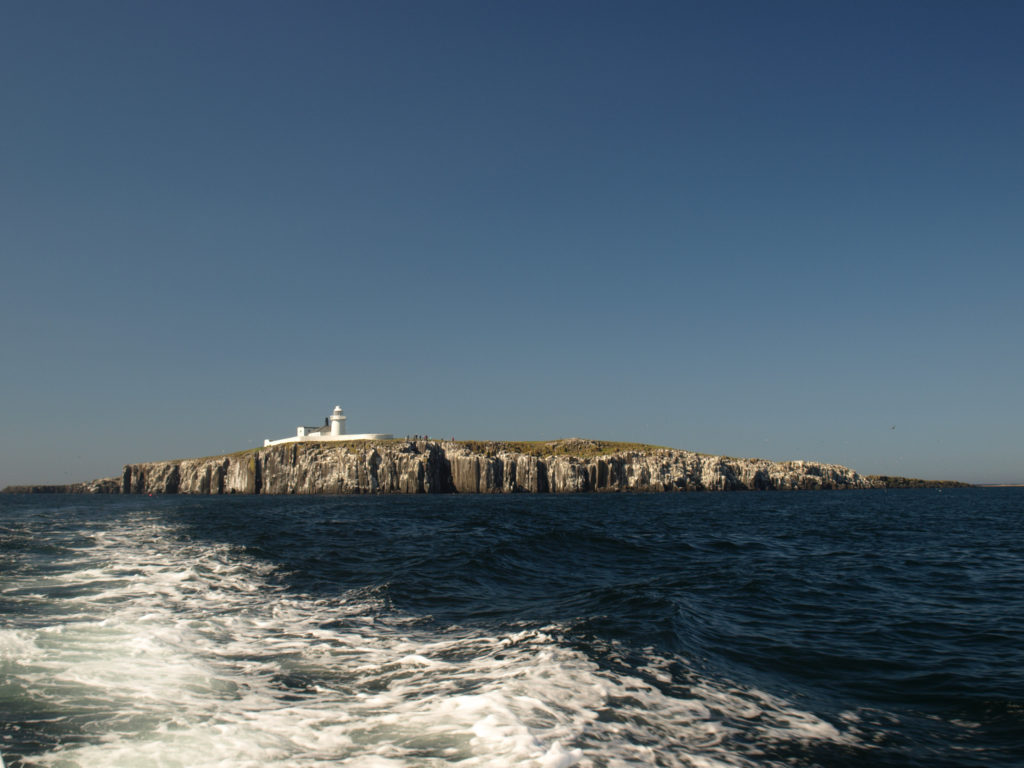 Farne Island on a clear day

On the Holy Island of Lindisfarne, where my novel is set, the remains of an Anglo-Saxon stone church were recently discovered. Archaeologists also uncovered the foundations of a tower nearby. The find, undertaken by the Peregrini Lindisfarne Landscape Project, is of major historical importance and has precipitated a complete re-evaluation of everything that was known about the earliest monastery buildings on the island.

I had the very good fortune to be on the island for a few days while the excavations were being carried out and was able to view this sacred site as well as talk with some of the volunteers involved. The building, constructed of white sandstone, was situated on an exposed, wind-torn, rocky promontory just a few metres from the cliff’s edge. It stood facing the royal fortress of Bamburgh, the stronghold of the monks’ first patron King-Saint Oswald, across the water.

On a clear day, such as the gloriously sunny morning of my visit, the Farne island, used by both Saints Aidan and Cuthbert as a hermitage, would have been visible.

The find has generated huge excitement, not only because it must have been a key site of the monastic community which christianised the North-East and produced the renowned Lindisfarne Gospels, but also because up to now it had been believed that the Anglo-Saxon inhabitants of the island built only in wood.

Contemporaneous accounts by the Venerable Bede describe a wooden church in which the monks worshipped. Certainly, the monks revered their wooden churches, one of which they dismantled and took with them when they abandoned the island at the time of the Viking invasions. A fascinating detail of the excavation is that the primitive nature of the chisel marks on the stone suggests that the mason was unused to working with that material.

Perhaps. The island is alive with speculation. Everyone has an opinion, a plausible theory. Archaeologists, historians, tour guides, pilgrims, tourists, hotel staff and island residents all vie with each other to produce their own hypotheses.

The monks must have chosen this challenging location for their stone church for symbolic reasons. The church dates potentially to Saint Aidan’s time because its altar is located against the east wall. It may be that this church was built around Saint Aidan’s original wooden church to act as a protective structure. Possibly it was a replacement for the original church. It’s likely that this was one of several churches on the island. The tower was presumably the tower referenced by Bede which received the beacon signal from the Farne Island announcing St Cuthbert’s death.

It struck me listening to all these theories how strong the impulse is in human beings, including among fact and evidence-driven researchers, to find a story, the real story. There seems to be some deep-seated need in us to uncover the mysteries of the past and explore their meanings. But while archaeologists and historians must rationalise and balance probabilities, the fiction writer has the luxury to imagine and invent, harnessing the known details, teasing out their metaphorical significance and building the story around them.

For me, the most resonant part of this discovery is not the material the church is made of, but its location on the precipice. I can imagine Cuthbert on a sunny day standing by the church, looking out to sea, meditating on the lonely beauty of God’s creation. I can see him on a stormy day, struggling against the howling wind, trying to reach the door of the church. I see him looking over to Bamburgh, ruminating on the latest political events. I see him looking out to the Farne Island, longing for the absolute solitude there, and I also see him on the Farne, looking back to Holy Island, to the white light reflected by that sandstone church and longing for the company he’d left behind.

The site of the church has been filled in again to preserve it. Future digs and scientific tests may uncover more of the stories behind the church, the people who built it and the people who prayed in it. For now these stories remain elusive, their clues written in stone but yet to be deciphered.