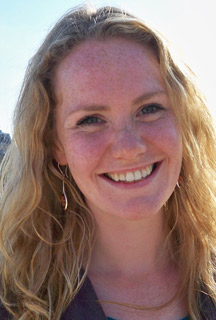 Poet Leanne O’Sullivan is from the Beara Peninsula in West Cork and was educated at UCC.  Her acclaimed first collection, Waiting for my Clothes, was published by Bloodaxe in 2004.  Two more collections, also from Bloodaxe, have appeared since –  Cailleach: The Hag of Beara  (2009) and The Mining Road (2013).  She was given  the Lawrence O’Shaughnessy Award for Irish Poetry in 2011, and received a UCC Alumni Award in 2012.  Her work has been included in various anthologies, including Best Irish Poetry 2010 (Southword Publishing), Selina Guinness’s The New Irish Poets (Bloodaxe Books, 2004) and Billy Collins’s Poetry 180: A Turning Back to Poetry (Random House, 2003).

Leanne was the recipient of the 2009 Ireland Chair of Poetry bursary and in 2010 was awarded the Rooney Prize for Irish Literature. Formerly a writer-in-residence at UCC, she was appointed lecturer in creative writing in 2016.