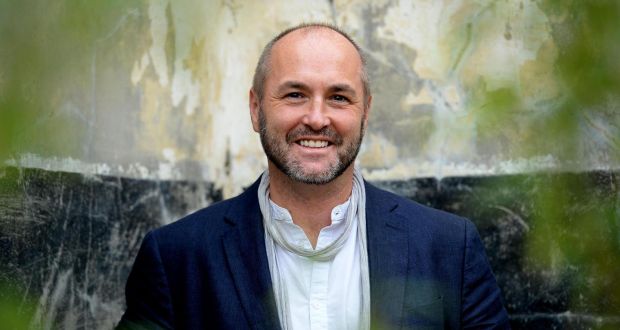 Author Colum McCann read from his forthcoming novel, Apeirogon, at UCC this week and discussed the disruptive power of writing. MA student Debra Fotheringham was there.

Dublin-born writer, Colum McCann, calls himself an “Irish writer from New York,” and it was indeed all the way from his home in New York City that McCann travelled to treat the packed audience in UCC’s West Wing to a powerful reading from his new novel, Apeirogon. (The title comes from geometry – a generalized polygon with a countably infinite number of sides.)

Apeirogon is so new, in fact, that it is as yet unreleased, slated for publication next month  from Random House.

The excerpt McCann read Tuesday evening was its Irish debut. Using a deliberately fractured narrative, the novel explores the world of conflict inhabited by two fathers, Palestinian, Bassam Aramin, and Israeli, Rami Elhanan, each reeling from the loss of a daughter to violence in the West Bank. In his reading, McCann chose passages that introduced us to his main characters, two real men whose lives were forever fractured and left bereft by violence, but somehow brought together by their shared loss.

Sharp, rich, and at times darkly humorous, McCann’s reading showed us two very different families with a mutual struggle to shape a kind of normalcy amidst an unsettling amalgam of domesticity and violence.

In the question and answer session after the reading, moderator Mary Morrissy, Associate Director of Creative Writing, asked a pertinent and topical question: does the writer (in this case a white male Irish/American writer) have the right to attempt to tackle the Palestinian/Israeli conflict in a novel?

McCann’s response was thoughtful and measured.  “I think this idea of cultural appropriation and talking about it is fantastic and it’s so friggin’ necessary and there’s so much errant cultural appropriation going on that I salute those people that are calling it out. And I think it’s really kind of fantastic that they are calling it out. And another part of me also thinks that you have to be honest. When you enter a subject, it has to be full of absolute honesty and rather than appropriating from a culture, you’re celebrating a culture. Rather than looking down on a culture, you’re asking yourself, can you be allowed into a culture?

“This stuff is not easy; this stuff is contradictory; this stuff contains multitudes. It just strikes me that so much of what we do nowadays is one answer, whereas there are a number of different truths going on at once and one of the things we have to do at a university level and a personal level is to hold contradictory ideas in the palms of our hands at the same time.

“I have a complicated relationship with the idea of cultural appropriation and yet I will stand by my novel. And I do think people will take a whack at it. In fact, some people have. You’re not Israeli. How dare you? You’re not Palestinian. How dare you? But it is our story and the way we relate to others becomes a portrait of ourselves.”

Morrissy asked another difficult but important topical question: what do you think writing is for?

McCann used the example of writers Emily Dickinson and Walt Whitman, contemporaries of each other. Where Dickinson wrote inside the mind, Whitman wrote outside the body but both created beautiful and vibrant work.

McCann’s reading and thoughtful responses to questions were rich with empathy. To us, his audience in the West Wing, he communicated a clear desire as a writer to be a kind of facilitator for seemingly disparate people to find common ground and understanding. He said, “I know my purpose, my own peculiar purpose [as a writer], is to use stories and storytelling to disrupt what’s going on and ask people, including myself and my kids and whoever else happens to be around, to question the narrative as it’s been given to us and maybe turn things around.”